The Midwestern Hydrogen Partnership is a collaboration of industrial, academic, research institutions, government, and other interested stakeholders that work cooperatively to enable the Midwest to address the challenges, barriers, and opportunities that can enable a prosperous hydrogen economy in the Midwest.

The Midwestern Hydrogen Partnership advances and promotes the development and adoption of hydrogen technologies to enable clean, secure, and resilient energy sources, and create economic development opportunities throughout the Midwest.

Why Hydrogen and Fuel Cells

There is a growing worldwide interest in developing and deploying new clean technologies that utilize hydrogen and fuel cells to combat global warming. Fuel cell-powered cars and buses are beginning to appear on the roads in California, Europe, and Asia. With increasing concerns about the environment, new markets for hydrogen and fuel cell technologies are developing in industries that previously did not deploy these technologies and are difficult to decarbonize by other means, such as rail, maritime, aviation, steel production and industrial heating. With the development of these markets, it is projected that hydrogen could become a $130-$170 billion dollar a year industry in the U.S. by 2050. These emerging hydrogen and fuel cells markets present an opportunity to stimulate economic growth and improve the environmental health of the Midwest. 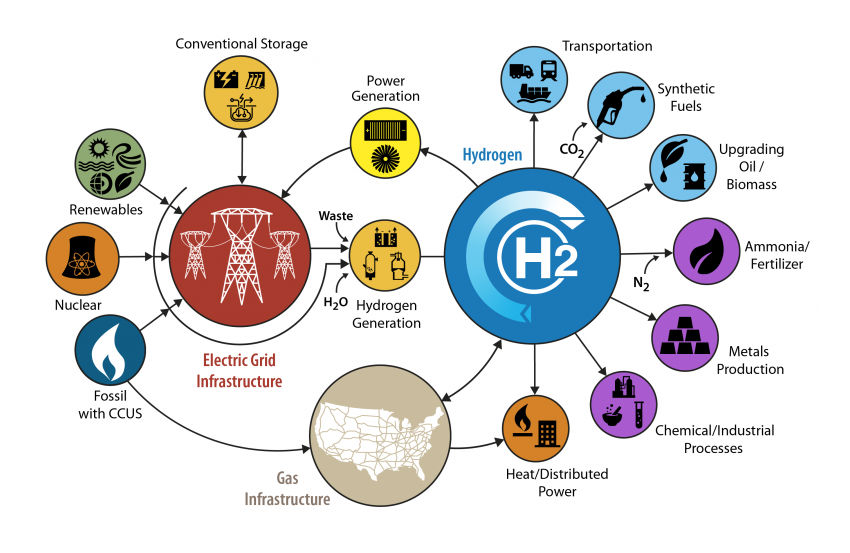 Why a Midwest Hydrogen and Fuel Cell Partnership

The Midwest, collectively as a region, offers tremendous opportunities for synergies between energy and water resources, hydrogen producers and fuel cell manufacturers, and consumers of hydrogen and fuel cell technologies that individual states cannot provide.

The coalition can serve as a resource that provides relevant information, and identifies and links opportunities between different stakeholders in the Midwest, including state, county and city officials, industry players and interested customers, and act as a liaison between the Midwestern states and the coalitions in other states and globally. The coalition can explore opportunities and synergies with other public and private initiatives that can benefit the plans of Midwestern states to decarbonize and spur economic growth.

There is a lack of knowledge and awareness of hydrogen and fuel cells, their benefits, safety, and hazards among the general public and many public officials and decision-makers in the Midwest. Unlike California, New York, Connecticut, Massachusetts and other states, most Midwestern states lack a roadmap or plan for how to develop, integrate, and take advantage of the emerging hydrogen economy.

Opportunities for Hydrogen and Fuel Cells in the Midwest

The Midwest has the intellectual capital, manufacturing capabilities, infrastructure and human capital necessary to compete for and win the jobs that will be created.

The Midwest is home to some of the top public and private research universities in the world as well as three U.S. Department of Energy National Laboratories.

The Midwest has abundant resources for producing CO2-free hydrogen such as wind and nuclear power. As such, the Midwest is well positioned to capitalize on the emerging hydrogen and fuel cell markets.

The Midwest is home to many highly skilled, but displaced, workers from the coal mining and coal power generation sectors.  Many of these workers would be excellent candidates for employment in the emerging hydrogen economy.

In 2021, Champaign-Urbana MTD will welcome its first zero emission buses. Two 20-year-old diesel buses will be replaced with zero emission hydrogen fuel cell electric buses. The new buses will run on hydrogen and emit only water vapor. MTD will produce the hydrogen to fuel the buses on site using an electrolyzer, with the long-term goal of 100% renewable production.